Way back in the dark depths of lockdown, in February 2021, I got introduced to Welsh Businesswoman of the Year, Amber-Lort Phillips, owner of The Little Retreat . We had only just set up Out and About, and the easing of restrictions seemed a way off, but I had a feeling that this beautiful space in Wales would be a great setting for a Glamping weekend.

The Little Retreat is nestled in the heart of Pembrokeshire National Park. Cited by Forbes, National Geographic, and Wanderlust, it’s been called ‘Pembrokeshire’s hidden glamping secret’. We chose it for its natural beauty and its remoteness, offering a safe and supportive space for LGBTQIA women to come together after what has been a very challenging 18 months. 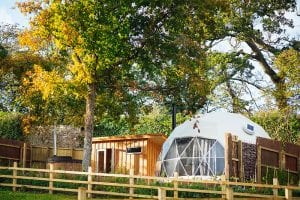 One of the Geodomes complete with hot tubs and wood burners

Out and About took over the whole glamping site. There were luxury geopods and stargazers, which came with hot tubs, open air baths, wood burners and telescopes, amongst other features. And up on the castle terrace, with a view to die for, space for bell tents and campervans. We also took over a lovely community hostel, once the village school, right next to the glamping site.

The long weekend was promoted in March and sold out in just 7 days. But it seemed a long time before around 35 of us finally arrived at the beautiful village of Lawrenny in Pembrokeshire on the 17th September, ready for a long weekend of glamping, wild swimming, yoga, great food, canoeing, walks and campfire chats.

That Friday it rained. I mean really poured down. Instead of dining in a beautifully restored walled garden, we ate in a community hostel. The BBQ was damp, so the food took longer to prepare, and as an event organiser, you worry that the dream you promised somehow may not come to light.

However, over great food and free drinks, thanks to chef Jen and Greene King Pubs, something special happened. The women, most of whom had never met before, bonded. The room became full of laughter and chat, and the sense of belonging you get, when people who have something in common, come together.

Saturday morning, we had a yoga session, delivered by a local teacher. The rain had eased, and the setting in the walled garden, was just sublime. The 90-minute session flew by, leaving those who attended, feeling relaxed and restored. 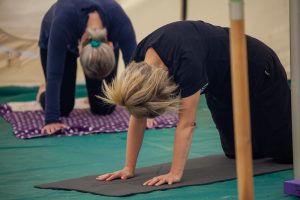 Yoga in the walled garden

After yoga we all wandered down to Lawrenny Quayside. It was a beautiful walk, with estuary on one side and rolling fields on the other.

This may be a small village, but it hosts an award winning tearoom, that serves amazing seafood, and a pub sat right on the water. The walk back to the Little Retreat takes you through woods and fields, finally ending at the site of an old castle.

That evening we were treated to another feast from Jen, and as the rain had stopped, and the sky cleared, we got to sit around a roaring campfire. By then everyone was starting to relax into each other’s company. A few women had expressed their nervousness about attending, it’s been a tough lockdown for many. But it was lovely to be reminded how supportive women, and especially gay women, can be around each other. 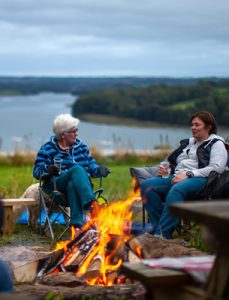 Campfire with a view

Out and About is all about connecting through shared experiences and one stand out of the weekend was wild swimming in the estuary.

A few of the women had specifically come because of this. What we did not expect was how many others would join them. The estuary is a perfect space for beginners, as it’s calm, and the temperature was particularly balmy that weekend. It was great to see the smiles of the faces of those that went and returned the followed days.

Sunday most of the group went off to experience the delights of Pembrokeshire. One of the real benefits of lockdown, is it has made us appreciate some beautiful parts of the UK. Just a short drive away from Lawrenny you can find the harbour town of Tenby, the stunning beaches of Saundersford and one of many welsh castles in Pembroke.

A small group also went canoeing, Sam from Paddlewest, turned out to be the perfect guide, taking the group on a beautiful tour of the Cleddau. His knowledge of the area, wildlife and history was fantastic, and his sense of humour kept everyone entertained.

Sunday afternoon we were joined by women from Women’s Institute’s in Pembrokeshire for a ‘Pride Picnic’. Over tea, sandwiches (cucumber of course) and home-made welsh cakes, it was lovely to bond, especially with some of the local ‘WIers’, one of whom had lived in Lawrenny since 1960s. There were no judgements, no questions around sexuality or gender choices. Just a group of women chatting and laughing, as it should be.

I was reminded of the words of Jo Cox ‘We are far more united and have more in common than that which divides us’ as the group, of varying ages and background, bonded whilst regaling stories.

Sunday night we dined by the campfire on the castle terrace. The sky was clear, and the lack of pollution made for great stargazing (you can see why the telescopes are in the pods). By now everyone had completely relaxed and there were heavy hearts about having to leave the next morning. 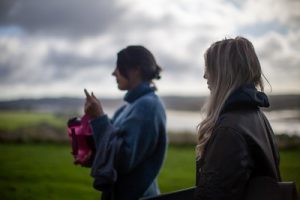 A great place to just chill out

The Little Retreat is a stunning space. But what it helped create is even more special for me. Those that came glamping spoke about the laughter, the friendships made, the new experiences had, the beauty of the surroundings and the joy and comfort of just being in a safe and supportive space.

Over the last 18 months, I have got to know the amazing and award winning trans activist, Bobbi Pickard. And I was delighted that she could join us for the weekend. On the Sunday evening, as we walked back down the hill from the campfire towards the glamping pods, she hugged me and left me with these words.

As we head into 50 years of Prides in the UK and out of (hopefully) lockdowns that have only exacerbated existing challenges around loneliness and wellbeing, it’s time for change on the LGBTQIA events front and Out and About are up for the leading the charge on this for women and those that are non-binary. 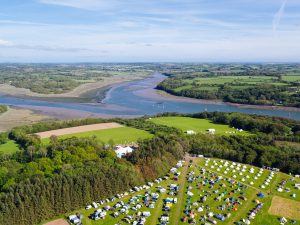 That’s why we will be hosting what we believe is the first ever UK LGBTQIA Wellness Festival, Out & Wild, designed by women for women and those that are non-binary, in the grounds of the Little Retreat, June 10-13th 2022. A space to truly explore, experience and embrace.

Polly Shute is Co-Founder of Out and About LGBTQ and Out & Wild Festival.

By polly shutePublished On: 21 October 2021Categories: Fitness, General, GlampingComments Off on Glamping, reconnecting and making memories in Wales